So since blizzard prep kind of took over last week along with training dogs, I never got around to sharing some photos from a recent upland training day.

I figured I would give everyone a break from the snow photos/status updates/ tweets and finally get around to blogging about our recent day spent with friends and bird dogs.

First up is Mac, a Wirehaired Pointing Griffon.   I knew of Mac before he was even named Mac (short for Potomac). I had been talking with his owner about possible breeds and then about Mac’s breeder and bringing a dog from CA. It has been great being part of this pups life since before he was born practically. He landed in a wonderful family who is committed to having a great family dog who also hunts.

We have taken things very slow with Mac in the field, all at his own speed as Griffons can be rather soft and slow to mature.  Considering this boy has been on birds less than 10 times he is doing awesome.

A couple sessions ago Mac decided he was a bird Maniac and ditched his beautiful point. There was nooooo holding him back, even with the check cord around his waist he was dragging me to the birds and just wanted them soooo bad.
So we went back to the drawing board, we put him through obedience training at my place which gave him a break from the field as we came up with a plan.  In the end we decided we would try him with some bird launchers (you put a game bird in a contraption that will launch the bird into the air with a push of a button) to see if we could get him to realize he has to stop or the bird flies. 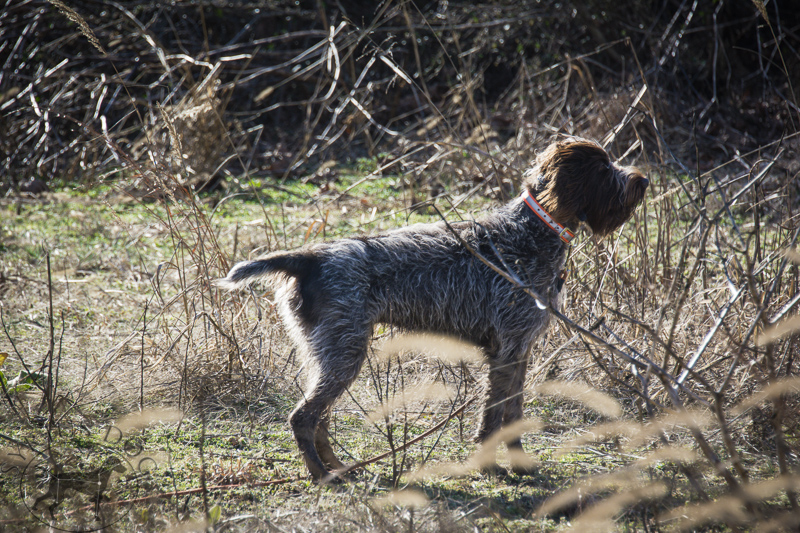 It took 1 bird in a launcher being launched and he began to hold his point like a champ. SMART pup, he stood still for several minutes on the second bird and on the 3rd as well.

The next session with launchers had his owner beginning to walk in on the bird to flush it to further test Mac and his steadiness. He progressed beautifully so we decided we would try to shoot a bird over him the next outing.

Well the weather was not in our favor that day, it was nice and cold but WINDY. Wind is not an easy thing for a young green dog as it disperses the scent cone of the bird much more quickly and usually in erratic patterns.  This will make most young dogs doubt their nose and be soft in their points and less steady.  Mac was anything but, he honed in on the birds easily and he was very steady.  Sadly they were not cooperating in their flying pattern so we had to pass on the shots.  Next time Mac man, we will get you your birds.  Honestly watching him work out the wind and hold his point was a huge success for the day and even if we had planned to shoot a bird, we always have to do what’s best for the dog too.  Better to end on a good note when you can.

Next up my girl Luna 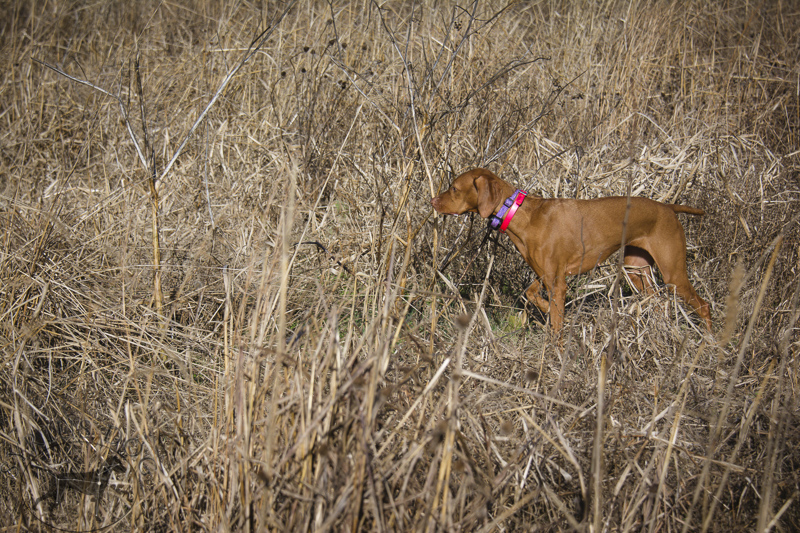 So I have been wanting to get Luna back into upland hunting for a while now, with the move last year and then the business this year it’s been hard to find the time.
As some of you know we did get into Dove hunting a little bit which has been great (even though I still haven’t managed to knock any down for her), both dogs love it.  But dove hunting is all about them waiting and then simply retrieving downed birds.  We haven’t done any real upland work for probably at least 4 or more years.  I got too busy working and training other people’s hunting dogs and she just got put on the back burner.  It’s been so long that I almost forgot how much I love watching her work, almost.

I finally decided to get her back out there, who cares that she just turned 8.  I hope to be able to take her out hunting myself eventually instead of just being the dog handler, which I’m hoping will allow us more hunting opportunities. 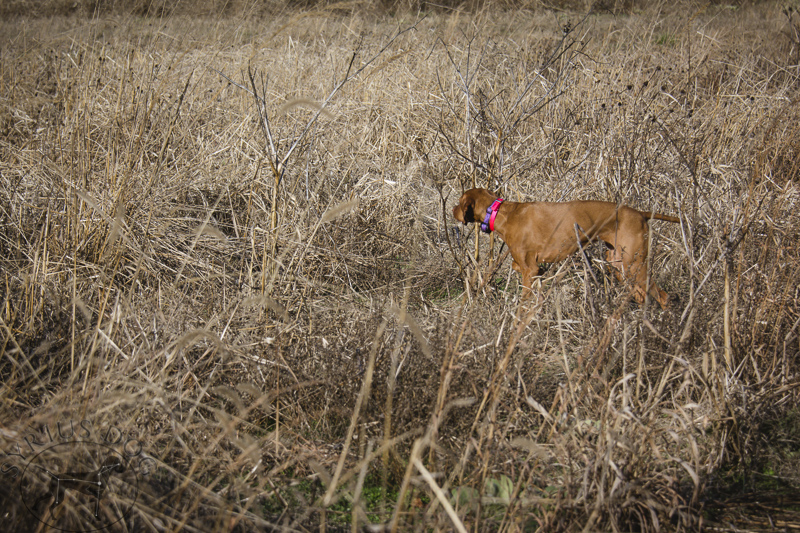 Though it’s been more than 4 years since we did any real field training, I did get her pretty far before we stopped. She had been through her fetch training and whoa (to stop) training. We were working on her being steady to flush, shot, and fall.  Most days she did a decent job we just never finished proofing her to the point that I could hunt with her myself and trust she would be steady.  Luna loves to hunt most anything, and it really brings out her independent stubborn side so I have to really outsmart her and be present in the field or she will try and bend the rules a bit.

All that being said, I did not have very high hopes of her “remembering” much of her training. We planted 2 pigeons in launchers for her to start. My plan was have no plan really.
I released her to hunt and she went to work, she was all business and worked the field and wind hard.  We had a hard time keeping up with her and keeping track of her in the rather tall cover (brings back hunt test memories).  I didn’t say a word to her outside of some simple direction changes. I mainly wanted to see what she was going to do to kind of assess where we were at so we could come up with a training game plan. 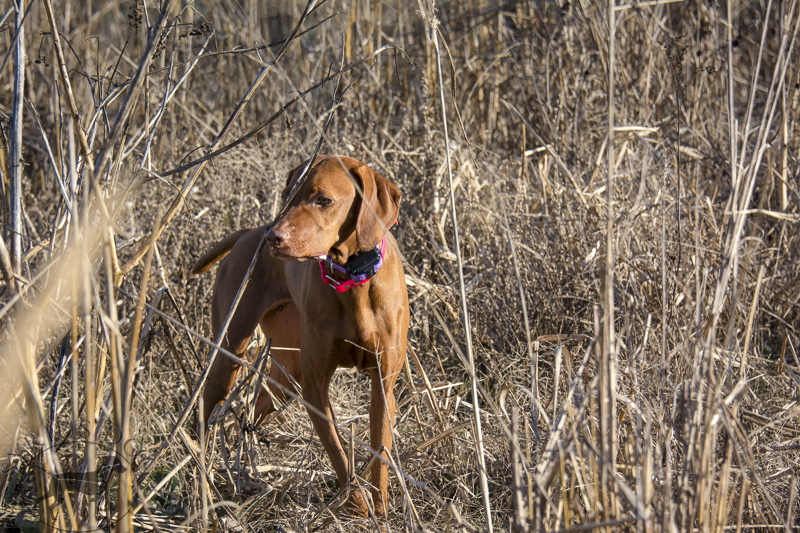 She rocked it, I was shocked… but yet I wasn’t because she has a track record for proving me wrong about things.  She held her points for both birds very well, enough that I could take a variety of pictures as I moved in on the birds. And I didn’t say a word to her, just waited to see what her choice would be, she made good choices.  And she was aces with her nose/scent work too.  That second picture was after she had just jumped a clump of grass and stopped dead in her tracks to point. Pretty awesome to watch.

I decided to end her session after 2 birds, she did great.  She knows what hunting and birds are about and I didn’t think it was fair to not be rewarded with a bird for such a job well done.  Though she also simply loves hunting.
Next time I think we will throw a check cord on for safety and mix some quail in so we have the opportunity to shoot if she does well again. Or we will simply begin to further steady her and then look at shooting as an option, but bottom line we need to have tools and plans in place to train towards our goals.

Parker is owned by my friend and has been coming along nicely in the field.  He is working toward his JH title so it’s all about bird exposure and simulating hunt tests.  I LOVE how intense he is in this photo.

He hunted hard, we repeatedly had to jog to keep up with him. He was all business which is great to see from a young dog. 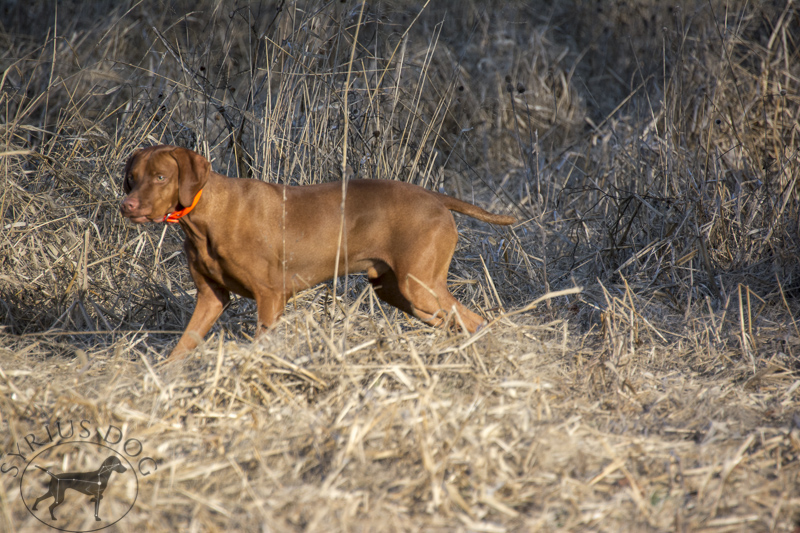 Good job Parker! He will have his title in no time.

Overall it was a great day in the field with the dogs and with friends.  Now we just need this blizzard to clear out so we can get back out there.  Looking at these pictures just makes it even harder to be patient.